Paolo Buffa created such an abundance of furniture designs that he is thought to have reconstructed the very history of Italian twentieth century furniture.

The important series L’Areddamento Moderno has more listings of his pieces than for any other designer. As a leading decorator in Milan, his work was published widely both in Italy and abroad. Yet since his death in 1970 little has been written about this prominent Italian Architect.

The sheer number and diversity of his projects is astounding. In the 2001 catalog of a show of his work,  I Mobili di Paolo Buffa by Roberto Rizzi,  he is credited with 115 projects. The catalog lists competitions, fairs, participation at the Triennale in 1930, 1933 and 1936, the building of villas, hotels, stores, movie theaters, opera houses, beer factories, tombs, restaurants, banks, offices and the interiors of cruise ships.

After receiving  his architectural degree from the Politechnico di Milan in 1927. Buffa worked briefly in the studio of Gio Ponti and Lancia.  By 1928 he had opened a studio with architect Antonio Cassi Ramelli with whom he designed a dining room for the 1930 Triennale exhibit. Not long after Buffa opened his own studio.

By the 1930’s, a growing debate arose in the publications on decorative arts and interiors as to the necessity of luxury and the moral obligation to provide good furniture to the masses. It was a time of political upheaval and the furniture industry began to reconsider its role. Concurrently a flood of new technologies could be harnessed to alter traditional methods of manufacturing.  Along with other important architects of the day, Paolo Buffa played a central role in leading Italian design into  the 20th century.

The renowned cabinetmaking shops north of Milan, Mose Turri di Bovisio, Fratelli Lietti, Serafino Arrighi and Marelli and Colico, were known for producing furniture of exceptional quality. They were also known for being provincial, old fashioned and resistant to change. Being a local gave Buffa a distinct advantage in establishing  rapport with these makers. At the time they were making furniture piece by piece. With his assistance and that of his colleague, the renowned ebaniste, Mario Quarti, Buffa was able to  help them streamline production. Employing better production techniques and simpler designs allowed the cabinetmakers to  produce furniture in small series. These lines were presented at furniture fairs and sold through catalogs. Buffa’s relationships with these cabinet makers was mutually rewarding. Buffa at times was the architect chosen for their homes and they went out of their way to produce superlative pieces for his comissions. Buffa continued to  work toward  modernizing production techniques over the years. In the 1960’s he was working with the innovative company, Cassina di Meda, once again moving Italian design towards ever more simplified forms and yet even larger production models. 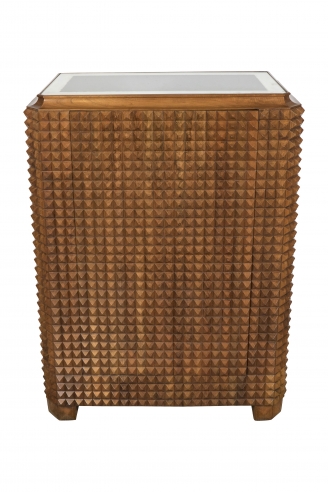 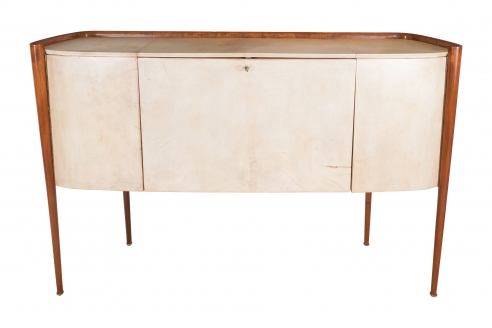